Click on any of the photos below to enlarge and learn more about the image. 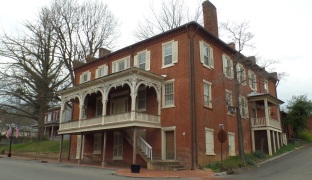 Built by John W. Simpson around 1843, this was originally called the “John Simpson Hotel.” In 1853, Simpson advertised that he had a buggy for sale and asked interested persons to call on him at the “mansion House.” The building is still more commonly known as the “Mansion House.”

Built in 1854, by the Holston Association of Baptist Churches, this building housed the Holston Baptist Female Institute, Tadlock’s School for Boys and the Holston Male Institute. In 1876, Yardley Warner purchased the building and established Warner Institute to educate “colored persons and train colored teachers.”

Jonesborough United Methodist Church was organized in 1822 and work began on the building in 1845.

Known as the Gammon – Hoss house, this home was built around 1848. William Gammon owned the property before selling it to John M. Hoss in 1863.

The Salt House was built in 1840 by businessman William Crouch. It was first used as a general store and wholesale grocery warehouse until the Civil War when it was used for storing salt. 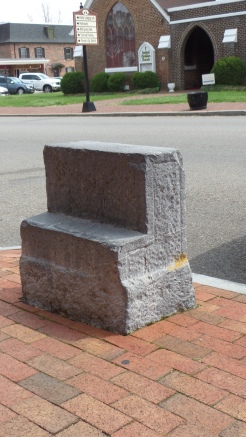 Upping block, used to get in and out of a stagecoach can be seen outside 119 East Main Street. This building was once a general store operated by W. E. May. 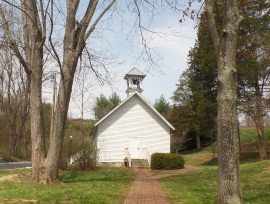 The Oak Hill School was built in 1886 in the Knob Creek community. It was moved to Jonesborough and now sits behind the Heritage Alliance and the Visitors Center.

The Washington District marker, located on the courthouse grounds was erected in 1930 for the Jonesborough Sesquicennial.

The First Christian Church was completed in 1874, built by William Fleming, master carpenter. After the congregation moved into a new building and this building eventually became the Parson’s Table Restaurant. It is no longer in use. 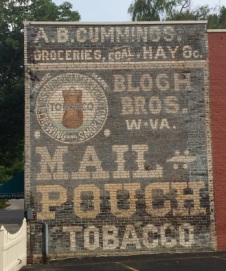 A. B. Cummings store is now more widely known as “the Mail Pouch building.” It was originally painted between 1892 – 1897 and was repainted in 1994. Jonesborough

The Washington County Courthouse. The back portion of the building once housed the jail. It has now been renovated and is the “Archives Annex,” an area used to house county records.

The Jonesborough Presbyterian Church as founded in 1790. The present building was constructed on this site in 1847.

Looking west on Main Street, the Baptist Church is on the right and the courthouse clock tower can be seen on the left.

Located on College Street in Jonesborough, this house was built in 1820 and later served as the home of the Jonesborough Female Academy. The building is now a private residence.

The Chester Inn was built in 1797 by William Chester and is now a owned by the state as a historic site. The building now houses a museum. 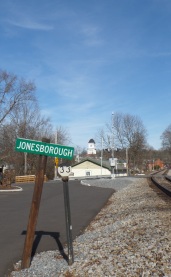 The Brownlow House was built in 1879 by Walter P. Brownlow, who owned the Jonesborough “Herald and Tribune”. He was a postmaster and was elected U. S. Congressman in 1897.

Sister’s Row, built in 1821 by Samuel Jackson as homes for his three daughters.

The Banking and Trust Company, built in 1886, now private offices and a second floor apartment. 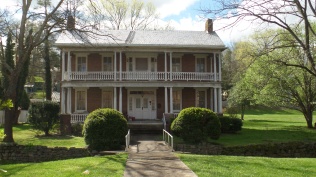 The Samuel B. Cunningham residence, located on the south side of West Main, was built circa 1840. 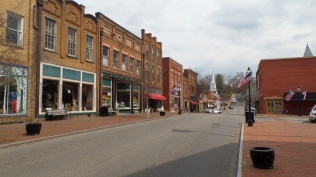 The Eureka Inn, built before 1821 by Robert Mitchell.

The Duncan House is now home to the Heritage Alliance of Northeast Tennessee and Southwest Virginia, located on Sabin Drive in Jonesborough. It is believed that John Naff built this home in the 1840’s. It was sold to Robert Mitchell Duncan in 1904.

Febuary Hill was built in 1832 by John Blair, congressman. It gets its name from Dr. W. S. Febuary, not the month of February.

Booker T. Washington School was built in the late 1930’s and was closed in 1964 when the schools were integrated. It is now home to the McKinney Center and is a multi-use facility providing arts education through Jonesborough’s Mary B. Martin Program.

The Rhea – Hoss House was built in 1857 by Dr. Thomas Rhea. Late in 1865, Dr. Rhea moved his family to Kentucky and the home was sold to another physician, Dr. Henry Hoss.

The cabin that sits next to the Chester Inn was built by Revolutionary War soldier, Christopher Taylor around 1778. Originally located about a mile southwest of Jonesborough, it is one of the oldest buildings in Washington County. It was moved to the present site in 1974.

The Shanks Oak is said to be “Jonesborough’s oldest resident,” and is estimated to be between 500 and 800 years old.

Known as the Blair-Moore House, this building was build around 1865. There have been several owners through the years and it now serves as a “Bed and Breakfast.”

The International Storytelling Center is located on Main Street and was dedicated in 2004.

Jonesborough was a major stop on the Great Stage Road, which ran between Washington, D. C. and Memphis. 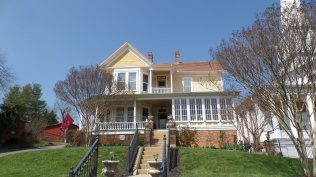 William E. May built this home in 1904. The property was the site where the first abolitionist publications were printed in 1819 – 1820 by Elihu Embree. 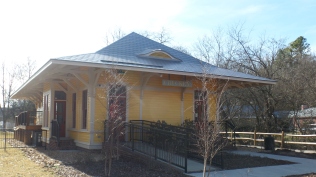 Called Buckhorn, this home was built around 1800 by James Stuart and became one of the first inns in the area. It was later purchased by Judge T. A. R. Nelson. 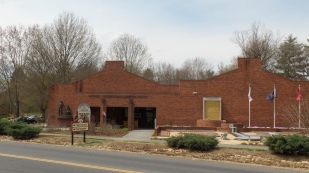 Jonesborough at dusk from the balcony of the Storytelling Center. 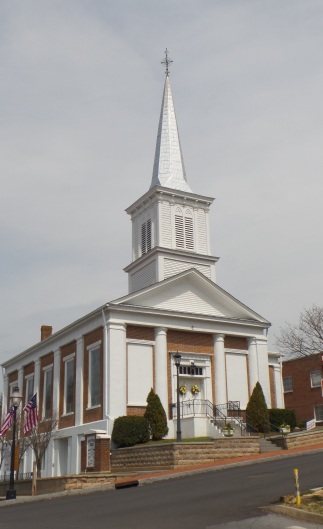 The First Baptist Church in Jonesborough was built in 1852. The church was founded in 1842. William Cate was the first minister of this church. 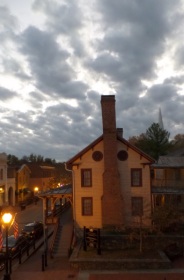 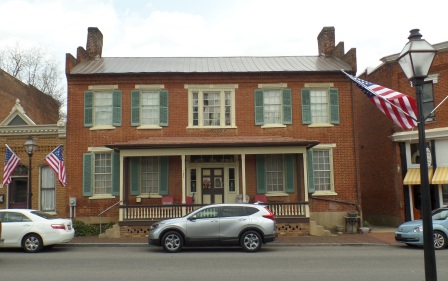 Jacob Naff purchased this lot in 1836 and built this house located on Main Street. 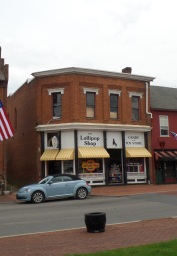 This building, now known as the “Lollipop Shop,” was built in 1905 by the Rhea Lodge # 47, Free and Accepted Masons. 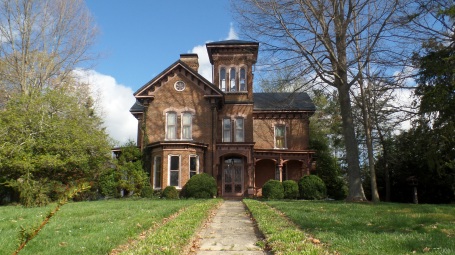 The Reeves – Hankin house on College Street was built in 1877 by James H. Dosser.

The Washington County Courthouse on a snowy March morning. Photo by Pennie Clark. 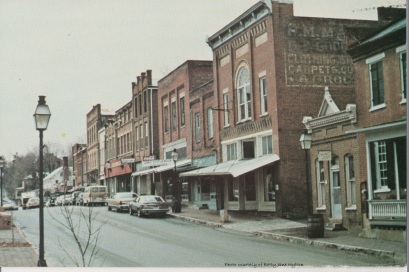 Academy Hill. In 1852, the Jonesborough Lodge of the Independent Order of Odd Fellows owned the property and operated a female high school and college on this site. This building was the Jonesborough High School from 1926 through 1971. It is now condominiums.

Back to the Photo Gallery