Deed Book A is home. Containing the earliest land records for what became Tennessee, it lies on a special shelf in the archives’ bank vault. The book’s return coincided with the 225th anniversary of Tennessee’s statehood. It seems appropriate and a little ironic that the two events occurred together. Deed Book A was sent to Nashville as part of the county’s display at the celebration of Tennessee’s centennial. Now 125 years later, it came home as part of the celebration of the state’s 225th anniversary. Both events were celebrated at a major event held in Jonesborough the evening of Tuesday, June 1st.

Governor Bill Lee and Secretary of State Tre Hargett returned the deed book to County Mayor Joe Grandy in a ceremony held by the Washington County Courthouse steps. Governor Lee used the event to kickoff a year-long celebration of the statehood anniversary, which will see related events happen across the state. United States Senator Marsha Blackburn also addressed the large crowd regarding the state’s history and the important role it has played in national events.

The evening was capped off with a mini-concert by the Oak Ridge Boys, who opened the ceremonies with an a capella rendition of the national anthem.

The deed book will be on display and viewable by the public in the archives’ Reading Room on a temporary basis from June 2nd-June 18th. 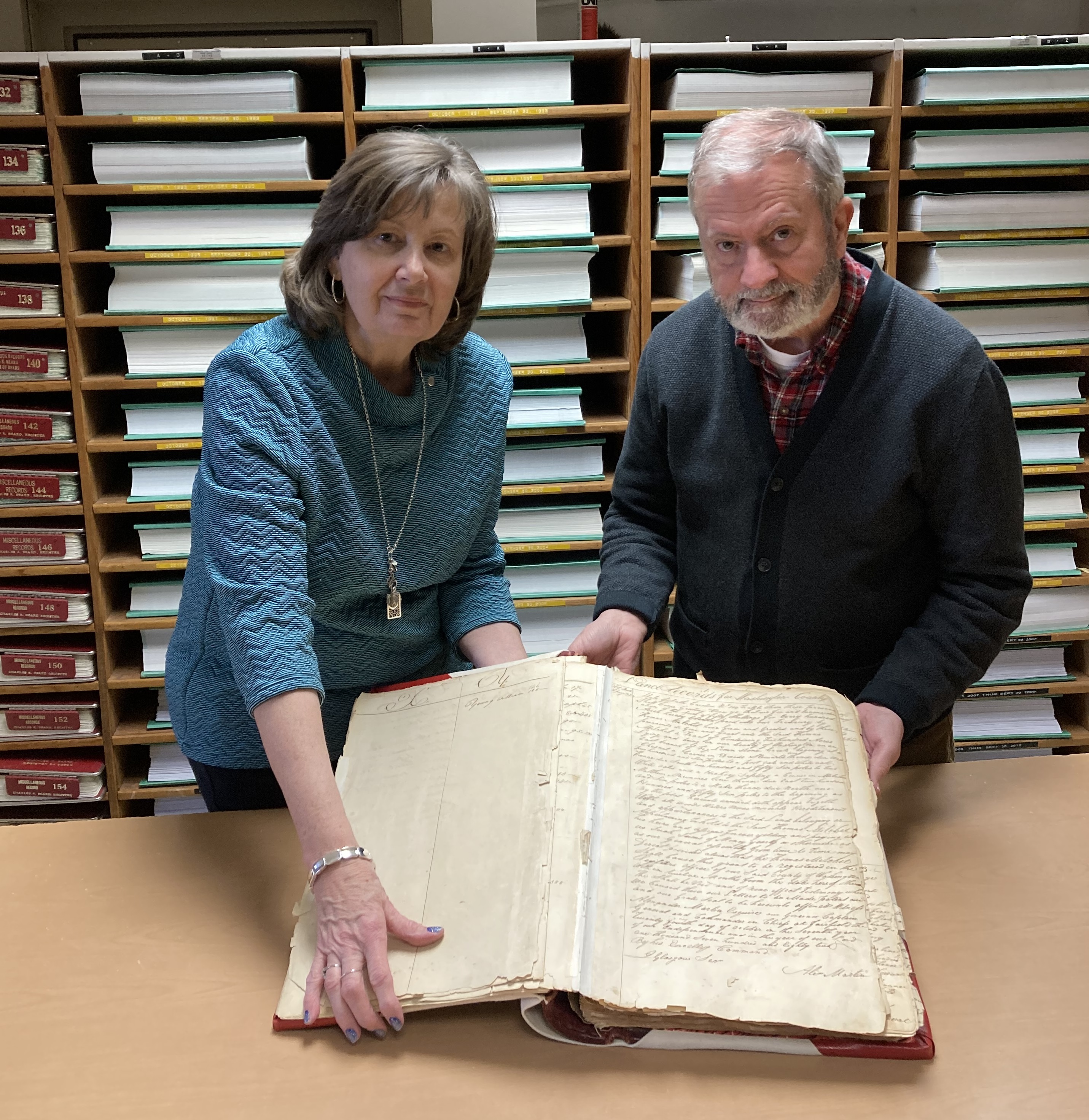 It’s coming home! Deed Book A, sometimes called the Watauga Purchase book, which contains the earliest land records for Washington County and, thus, for Tennessee, is being returned to the county after an absence of 124 years.

“This is a great day for the citizens of Washington County, past, present, and future,” said County Archivist Ned Irwin. “The Public Records Commission identified recovery of county documents as a priority and, over the past two years, we have recovered over 12,000 documents that had left the county’s custody. But Deed Book A is the most significant of all county records.”

The volume contains the earliest deeds and land grants for the county, beginning with the indenture made in March 1775 between the earliest settlers and the Cherokee chiefs to purchase land holdings in what became Washington County and its’ surrounding area. “All land titles in the present day trace their claims back to the records found in this book,” Irwin said.

Deed Book A was sent to Nashville in 1897 as part of the county’s exhibit during the Tennessee State Centennial celebrations and never returned. For several years now, the county has disagreed with the Tennessee State Library and Archives (TSLA) over the book’s ownership. This past January, the County Commission unanimously adopted a resolution requesting the return of the deed book. State Senators Rusty Crowe and Jon Lundberg and State Representatives Rebecca Alexander, and Tim Hicks, with the unanimous support of the Northeast Tennessee Caucus of the General Assembly, worked throughout the session with Tennessee Secretary of State Tre Hargett to secure the deed book’s return to the county.

This week, in a bold and decisive move, Secretary Hargett, who oversees the TSLA, took a fresh look at the facts the county recently clarified and made the decision that the volume belongs to Washington County and will be returned in the near future. “Secretary Hargett should be always remembered by the citizens of this county for taking the courageous action he took on our behalf,” Irwin said.

“Locally, it took a team to get this book returned, and in our public officials and every private individual who helped and supported the effort, we had the greatest team one could have,” Irwin said. “I especially want to thank Mayor Joe Grandy, who made this a personal priority, and County Attorney Allyson Wilkinson and my archives associate Donna Cox Briggs, who were invaluable.”

A public celebration is planned on Tuesday, June 1, 2021 in conjunction with the book’s return. More details will be forthcoming on this momentous event.

A processing project lasting two-and-one-half years was recently completed making available for the first time over 150 years of Washington County Circuit Court cases. This involves 24,183 civil and criminal court cases, spanning a period from the early 1800s into the mid-20th century, that are now usable. These records offer researchers the ability to dig deep into an ancestor’s life or into various aspects of the history of Washington County.

Circuit Court records are particularly helpful in providing a picture of a society or community at a given period of history. You learn what a turbulent and violent time it was during and in the years immediately following the Civil War. You learn a lot about the nature of slavery and the efforts at emancipation during the antebellum years. You see the impact of war has on domestic relations in the skyrocketing number of World War II-era divorces. You witness the debilitating effects on society caused by illegal liquor manufacture during the Prohibition era in the county. Family relationships are often brought out in civil disputes over property, debt, or inheritance. Etc. Etc. Etc.

Among the types of cases found are those involving debt, divorce, damages, land disputes, assault and battery, tippling, lewdness and adultery, robbery, larceny, forgery, transporting moonshine, and notable murders, among many other civil disputes and criminal actions.  Among the types of documents found in the case files are bonds, correspondence, petitions, notices, bills, injunctions, complaints, subpoenas, depositions, exhibits, court decrees, and writs.

An online guide provides a listing of these cases that is keyword searchable on the department’s website at the following url: https://wctnarchives.org/record-groups/.

County Archivist Ned Irwin with the paintings prior to their being hung in the Reading Room.

The last two pieces in Jonesborough artist Peggy Root’s quartet of seasonal paintings for the Mildred Spaulding Kozsuch Memorial Reading Room were installed on March 31st, 2021. These paintings compliment two other paintings hung in early 2020 that depict Spring and Summer scenes in Washington County. (For more on these, see an earlier website article.) The paintings were commissioned by the Friends of the Washington County, Tennessee Archives and are provided to the department as permanent loans.
The Fall painting is entitled “Nolichucky River (Bumpass Cove) in Autumn.”  The Winter painting is titled “Winter Day, Tipton-Haynes.” Both paintings are oil paintings on Belgian linen canvases. The 4-feet high by 6-feet wide paintings are encased in handcrafted frames made from locally sourced wood. The paintings were installed by Don and Jacob Muldoon, Jonesborough contractors.
Peggy Nichols Root is a plein air painter, one who paints outdoors amidst the scene she is painting. And she does this in all kinds of weather from sun and snow to everything in between. The paintings in the archives were painted in this way. She has been called “the definitive painter of the Southern countryside.” Growing up, she spent the school year in Florida and the summers in Fontana in western North Carolina, where her father had an art school. Despite having a painter for a father, Peggy began her career as a park naturalist in the Great Smoky Mountains. Eventually, she followed her father and became a painter. Being a plein art painter allows her to combine her love of painting with her love of the outdoors. She also married a painter, artist Tom Root. For nearly thirty years now, they have lived and raised a family in Jonesborough.
The archives thanks the FOA for the commission and Peggy for the wonderful paintings that will be enjoyed by anyone visiting the department, even if you don’t come to research.