STORIES UNEARTHED IN THE ARCHIVES

Hidden Voices is an occasional series that will appear on this website highlighting documents uncovered in the archives, which you may find interesting. Certainly, the stories the records tell are unique. With over 250 years of records, there are a multitude of potential stories that help document the history of Washington County. The Hidden Voices series will emphasize the stories and people history has forgotten or never knew.

FROM THE OLD WORLD TO THE NEW:
HERMAN CONE’S CITIZENSHIP PAPERS

There’s a single-page document found among the Circuit Court case files of 1856 that tells an interesting story. It’s an immigrant’s story, which, of course, written large, is America’s story. The immigrant’s name was Herman Cone. In 1856, he lived in Jonesborough on the site of the present Washington County Archives building.

Cone was born in Bavaria in Germany in 1828. Seeking better opportunities and to escape the oppression of being Jewish in Germany, Cone came to America in August 1846, settling initially with family already residing in Richmond, Virginia. In 1853, he and his brother-in-law Jacob Adler arrived in Jonesborough and opened what became a prosperous clothing store known as Cone & Adler. The two-story building was located where the county archives is today. The shop was on the first floor, and Cone and his family lived on the upper floor. Adler eventually lived in the house today known as February Hill.

In Jonesborough, Cone raised what became a rather remarkable family. His two oldest sons, Moses and Ceasar, went on to establish the largest denim manufacturer in the world in Greensboro, North Carolina. Moses Cone’s mountain mansion is now part of the Blue Ridge Parkway property. Herman Cone’s daughter Claribel became one of the early women physicians in America. She and her younger sister Etta in later years spent much time in Europe collecting art. They were among the first to befriend and recognize such modern painters as Matisse, Gauguin, Cezanne, Van Gogh, and Picasso. They were friends of Gertrude Stein and many of the artists then developing in Paris. Pablo Picasso, who entranced by American color comic strips, sometimes traded them his sketches and drawings for the Cone’s newspapers. The Cone sister eventually acquired one of the great collections of modern art. Today, their collection forms a major wing of the Baltimore Museum of Art.

On the 1st day of November 1856, Cone went into open court before the Washington County Circuit Court judge and took the oath of citizenship to “support the constitution of these United States…to renounce forever all allegiance and fidelity to any foreign State, prince, potentate, or sovereignty, whatever and particularly to Maximillian, King of Bavaria.” 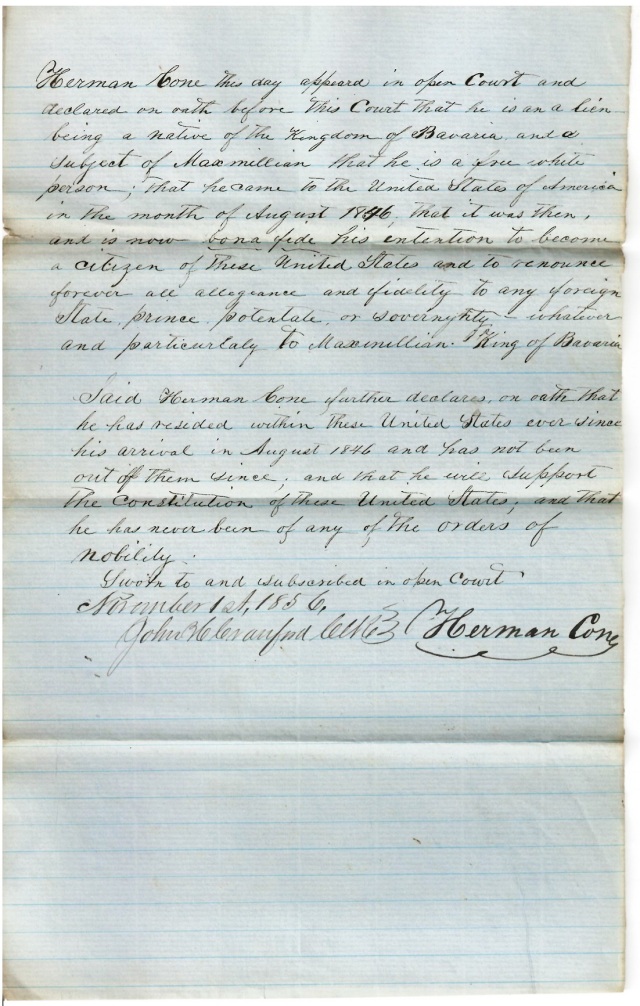